You are here: Home › Tod Nielsen, CEO of Borland
By Ted Roche on November 8, 2005 in Home Page 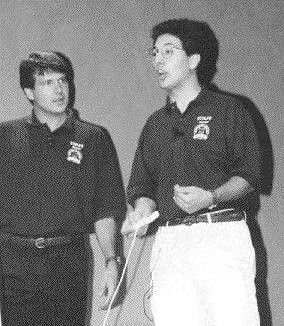 Borland Appoints Tod Nielsen as New President and CEO. Tod Nielsen and Chris Caposella yucked it up in the ‘Challenge Me!’ skit at Microsoft’s Visual FoxPro Devcon, Orlando, 1993. They were the marketing team for Microsoft’s new at the time acquisition, Visual FoxPro. He rose through the company’s marketing arm, but spilt a few years ago after a term as vice president of the platform and developer group in 2000. He joined CrossGain as CEO but was temporarily benched as part of a Microsoft non-compete violation controversy. Next, he was the the chief marketing officer at BEA, a job he left Aug 24, 2004 to “pursue other interests”. I last noticed Tod at Oracle.

Tod’s a sharp guy, and Borland a company with a lot of history and potential. Hope it works out well for both!